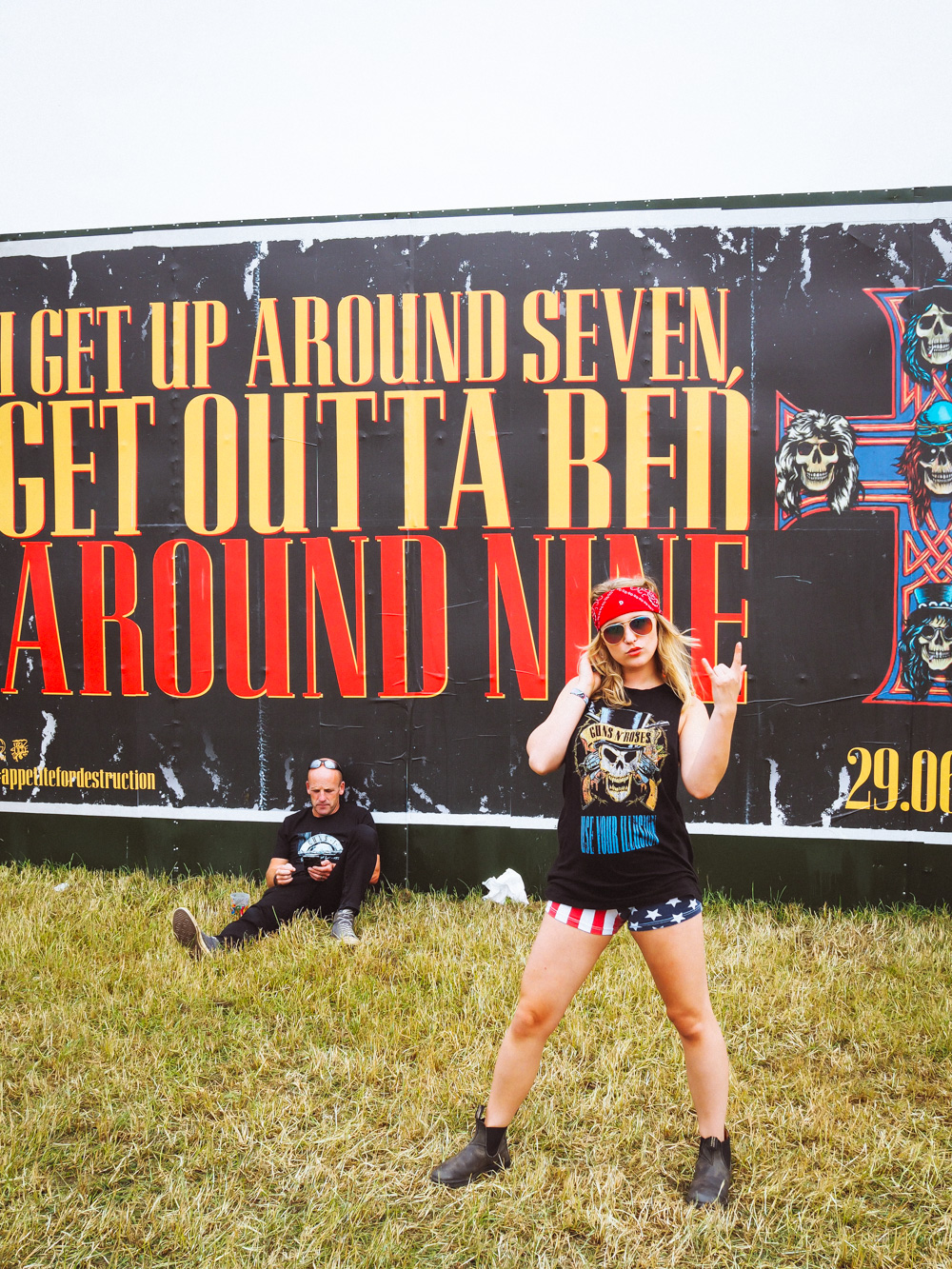 So if you follow this blog and my festival adventures you might think Download Festival is a strange festival choice for me… Big arena festivals are not really my thing and I’ve definitely never spoken about rock music on here before. BUT anyone who knows me well, knows that I was brought up on heavy metal and rock gigs were what I went to exclusively between the ages of 10 and 16!

In fact my first ever festival was Rock am Ring, a huge rock festival in Germany that I went to when I was 10 when I lived there… After that Motörhead was the first gig I went to, aged 12, with subsequent years of mosh pits and head banging all over the country with my dad after that!

A pilgrimage to Donington Park was well overdue so since I was having a Meadows sabbatical this year and with my favourite band of all time Guns n Roses as the Saturday night headliners we decided to have a little mid June family get together.

What? Download! The biggest rock festival in the UK – the follow up to the legendary Monsters of Rock which was held in the same location and the first of its kind back in 1980.
Where? Donington Park near Derby
Who? 80,000 rock fans from all over the country spanning generations!

I came (of course) as my alter ego Axl Rosé and was already a little warmed up from my first heavy gig in about 6 years, Machine Head at the O2 a few weeks before (also with my dad!)

What the 80,000 capacity lacks in decor and sequins it makes up for in its dedicated vibe… the highest concentration of black t-shirts in the country, more sewn on patches than a scout jamboree, every man with longer hair than mine and a way above average amount of piercings tattoos.

I went with my dad, my brother Adam and his mate. We just headed down for the Saturday and stayed in a hotel in Derby the night before and grabbed a taxi in the morning.

As well as it being a family affair I got to hang out with my gal Jessi fellow festival blogger at Where’s my Tent? who was sporting a fabulous catsuit from my ladies at Burnt Soul but still looking suitably ROCK. I got really into the whole thang and got me a lil vintage levi number from one of the stall to start adding patches to…

Check out Jessi’s Download review for some more excellent photos of me flouncing around.

The people watching is always the best at rock shows…

To be fair I didn’t see a HUGE amount of music either preferring instead supplies of white wine, pizza and sunbathing in the guest bar (standard). I did enjoy some absolute classics from Thunder and Black Stone Cherry on the main stage… and really enjoyed slightly alternative sets from some ridiculous band called Lawnmower Deth on the Zippo stage and “Japanese kawaii metal band” Babymetal.

Headliners Guns n Roses were incredible once again of course. I particularly enjoyed Sweet Child of Mine from my dad’s shoulders with the aforementioned contraband whisky he had smuggled in. Dad went for a sit down (understandably after the four-minute shoulder ride) and I spent the latter half of the set with some other random mega fans arms around shoulders screaming lyrics and generally sharing a GREAT TIME.

Instead of going back to the hotel I opted for late night campsite missions with some friends from work. If you do choose to camp be aware that the campsite, “The Village”, is FAR! That’s arena festivals for you – however it is quite a lol with a rock disco in a big tent until 3 am and a big selection of traders and other stuff up at the campsite. Even with the big mission it is potentially still a better idea than staying offsite as my dad had a real faff getting offsite, with a big queue and a long walk.

I was gonna stay for Sunday but I’m a wimp and opted for a lift back to Bristol in the morning!

I salute you Download, soz I didn’t stay to watch you Ozzy mate but huge respect to the last true subculture & the nicest crowd – every old rocker, new metaller and everything in between, I’m sure I’ll be back! \m/

Check out my full list of the best festivals in the UK.

Disclosure: To attend Download I had a paid-for Guest ticket from a colleague who also works for Festival Republic. This was not linked to my review but I thought it needed mentioning as my experience would have been slightly different to standard ticket holders. The guest pass was £60 for the full weekend and included a separate entrance access to the guest area which you don’t get with standard tickets. You can get access with some of the boutique camping options etc and I would recommend it!

[From the archives 2013] My love affair with Glastonbury Festival ♥